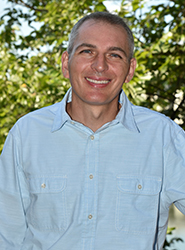 Laurent Zunino is a Lecturer in French studies. He supports the development of French and Francophone culture and languages through extracurricular activities such as the French Immersion Weekend Program, the UT International Festival, and the MFLL Soccer Tournament. He teaches undergraduate language classes levels 100-300.

He is also President of the Alliance Française of Knoxville (www.afknoxville.org).